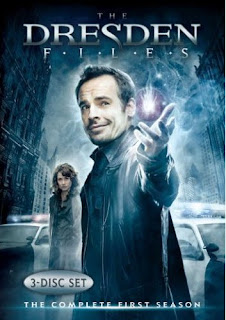 We just finished watching The Dresden Files: The Complete First Season on DVD last night. I normally don't review movies but since I'm such a fan of the books I thought I'd warn people to stay away from this.
I love the books. It's a great series about a wizard named Harry (yeah, I know) Dresden who lives in Chicago and hires out his wizarding skills like a private investigator. It's just alot of fun. So, the Sci-Fi Channel decides to create a series based on the books and then, after the pilot, decides to chuck nearly everything from the books and make it a formulaic magical PI show. What's crazy is that the pilot is pretty good. It follows the first book enough that it's recognizable and Harry actually does magic and stuff. And another crazy thing, they showed the episodes out of order on TV so you got the pilot as like episode 5. So, you're watching this show about a wizard named Dresden that's sort of like the books but not exactly and then in episode 5 you suddenly get a story from the book. And the continuity was screwed because for the pilot he's in a completely different apartment/office with a different font style on the door spelling out "Harry Dresden, Wizard."
I'm not going to go on. You've all seen this before. TV and movies always mess up our favorite books especially nowadays. It's pathetic. I'd much rather invest in a series or movie that's original so that I have no preconceived notions to get in the way of me enjoying it. But therein lies the problem. Hollywood has run out of original ideas. They keep rehashing the same crap over and over again. When they do finally buy into a great concept like putting The Dresden Files on TV as a series, they inevitably screw it up.
Hollywood, listen up! If you're going to do an adaptation of something that is beloved and has a fan base, try a little harder to get it right. And don't tell us you have to adapt the story to make it work. No you don't! Stop trying to improve on the canon that's already established. You're ideas won't be as good. Oh, don't believe me? Here are a few examples.
- The Green Goblin's costume in the first Spider-Man film. You brilliantly cast Willem Dafoe as Gobby and then hide his excellent face behind a robotic mask?
- In the second X-Men movie, who's lame idea was it to make Nightcrawler a religious freak with ritual scarification all over his body? And let's face it, Hugh Jackman is a good Wolverine but in comparison to the comic version, he's a major wuss.
- In Superman Returns, you bring back Lex Luthor as the villian. We are tired of Lex Luthor. Supes has other more powerful enemies. Bring them on. And you cast Parker Posie as Lex's sidekick and then gave her nothing to do? Shameful!
Okay, I'm showing my nerdiness by using only superhero movies but I think you can understand where I'm coming from. I don't want Hollywood to taint anymore of my favorite things. I've heard that they are going to do a Jonny Quest movie. Man, it could be so great if they did that right but I'm so afraid they're going to screw it up.
Hollywood, please don't ruin everything I enjoy! Please?
Posted by What Would Jesus Glue? at 12:53 PM

Thank you. We will definitely pass on checking out the series, and I'd probably have gone ahead and rented it, too. What is it about Hollywood that convinces them they should or are capable of making things 'better' or 'improved'???