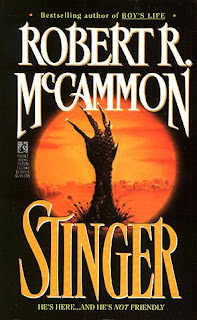 Stinger by Robert R. McCammon
This book, not one of RRM's best, involves the tale of a small Texas town under siege by an alien bounty hunter on the trail of his prey. It's been sitting on my shelf for years. RRM has written some of my favorite books including Swan Song and Boy's Life. This book, however, will not be on the faves list. It was just okay for me. I found the setting irritating. I don't like Texas much and this town sounded like the backside of Texas. Yuck. There was not a single character in the whole book I cared about which hurt the story alot. Folks were getting killed right and left and I didn't really care. The plot was very 80's. I could picture the movie playing out in my head as one of those really bad but fun alien movies from the 80's like Night of the Creeps or Night of the Comet. It could have worked that way and been a cult classic today. As it stands now, it's just a mediocre book from a writer who has grown beyond that now. Thank goodness.
Posted by What Would Jesus Glue? at 10:23 AM