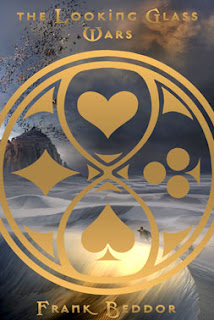 The Looking Glass Wars by Frank Beddor
"The "true story" behind Alice in Wonderland! Princess Alyss Heart is brutally cast out of Wonderland by her vicious Aunt Redd, who beheads Alyss' mother (Off with her head, she cries!) and begins to rule over Wonderland with an iron fist. Alyss escapes from Wonderland and is exiled to another world entirely--Victorian London--where she is adopted into a new family, renamed Alice, and befriended by Lewis Carroll. At age 20 she returns to Wonderland to battle Redd, reclaim the throne, and lead Wonderland into its next golden age of imagination."*
I really enjoyed this book (thanks Becca) and plan on reading the sequel Seeing Redd as soon as I can get it from the library. I believe this is the most enjoyable YA novel I've read beyond the Harry Potter books. I find that I'm disappointed in most YA books because they dumb things down too much or they try to fill them with cool imagery and mood but there's no story. I found this book to be very imaginative (which it should be because it's all about imagination) and quite fun. Like in the HP books, the dangers presented are very real. You realize as you are reading that there is a very good chance someone you like in the book is going to perish before the story ends. Last but not least, I really liked the spin on the Alice in Wonderland story. Can't wait to see what happens in the next book.

:)
I just checked out Seeing Redd from the library and I'm looking forward to reading it, too.

:)
I just checked out Seeing Redd from the library and I'm looking forward to reading it, too.