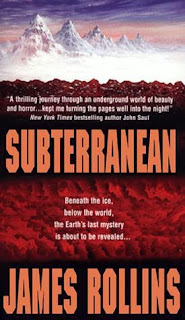 Subterranean by James Rollins
In this, Rollin's first novel, a team of scientists investigate a labyrinth of caverns discovered beneath the ice of Antarctica. Of course, everything that can go wrong does which is why these adventure stories are so fun. I had read this one before and have been a Rollins fan until he started writing a series that can best be described as Da Vinci Code meets National Treasure meets Tom Clancy. I wish he would return to the adventure stories he wrote at the beginning of his career. Fun stuff. This one is a light, fast read but enjoyable. A beach read if you will.

Mr. Fooster Travelling on a Whim by Tom Corwin and Craig Frazier
In this book, Mr. Fooster sets out on a series of walks and let's his imagination soar. I heard about this book on a podcast and decided to give it a try. The story is whimsical but the underlying message is take time to open your eyes and really see the world around you...and use your imagination. You just might have some fun. I didn't like the illustrations. I would have preferred some truly imaginative paintings but all they offer up is some sepia toned line drawings.
Posted by What Would Jesus Glue? at 11:36 AM