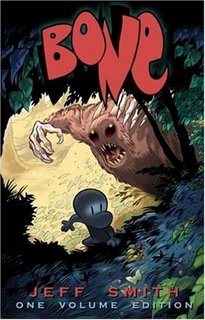 Bone by Jeff Smith - In this one volume edition of Smith's 12 year comic book masterpiece, the fate of the entire population of the Smith's crazy Boniverse is in the hands of a few tiny Bones (from Boneville) and the former royal family of Atheia. This book is huge in scope and rates right up there with Lord of the Rings and Elfquest. It's 1200 pages and it took me a few weeks to get it all read (a page or two every morning at breakfast) but it was worth it. This is a fantastic story with fantastic art. Everything about it is great. And...it's funny to boot. Comic book fan or no, you should give this epic a try. It transcends the cliche of being a comic book into being something akin to literature with visual aids.
The Martian War by Gabriel Mesta (aka Kevin J. Anderson) - This book supposes that the "War of the Worlds" really happened and that H. G. Wells and friends had a hand in quelling the invasion. This book is populated with many characters from other Wells books such as Dr. Moreau and Hawley Griffin from "The Invisible Man." There is a lot of fantastical stuff in this book and it will stretch your imagination a bit (where does the oxygen come from on their flight into space, etc.) but it's a fairly entertaining book if you enjoy the genre of alternate universes/histories and the like. It's a bit slow in places and the "Well, I say," attitude of the stodgy Britains to martians and the like is just a tad unbelievable. I think if even H. G. Wells met up with a real martian he'd be hard pressed not to at least say, "Holy Crap!"
Posted by What Would Jesus Glue? at 2:57 PM