My Life with the Beatles 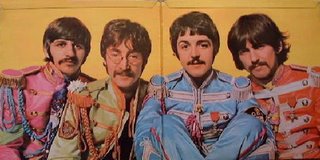 I don't know how old I was but I can distinctly remember sitting on my Uncle David's bed with him and his girlfriend at the time listening to Beatle's records. I was just a tot but Uncle David always let me hang out with him. He was cool that way. Back in those days, I was more captivated by the artwork on the album covers than the music. I remember staring endlessly at the covers to Sgt. Pepper and Magical Mystery Tour. (perhaps feeding the future artist within)
Sometime later, after we had moved to Georgia, my parents gave me an Alvin and the Chipmunks sing the Beatles album. I loved it. Kids really love the Beatles. Have you ever noticed that?
The next memory I have is listening to my Uncle Terry's album collection. My cousins, my sister and I would spend a week with him on his farm. At times it got boring so we searched for music to listen to. We would get into his album collection and give everything a chance. I remember my cousins (all girls) liked the Carpenters and Herman's Hermits. I gravitated toward the Beatles and remember discovering the song "Mockingbird" by Carly Simon and James Taylor.
Sometime while I was in middle school, Uncle Terry let me take a bunch of his albums. I chose a couple of Jimi Hendrix albums (including Are You Experienced) and Sgt. Pepper. I eventually sold the Hendrix albums to a friend. My young ears weren't sophisticated enough to get Hendrix at that time. (don't worry...I have Hendrix on CD now) I kept Sgt. Pepper and played it over and over and over. I didn't quite get it but it entranced me. I even found that on some of the tracks you could flip the balance back and forth and vocals would disappear. I loved that because then I could hear what the music was doing all by itself.
When I was in high school, I played in a band that went nowhere (man) but we had some fun and played a few Beatles songs along the way.
During my ministerial stint in SC, me and a couple of musical compadres had a band that gigged a little around the Columbia area. On our playlist was...of course...several Beatles songs. I even convinced the church I was working at to do a Sunday morning series called "...And The Beatles Said: Questions for God." In the series, we picked several Beatles songs and related them to questions that we have for God. We performed the songs as well. It was a big hit.
I can't pinpoint specific instances when I discovered all of the Beatles' music but I am a big fan. I had that Sgt Pepper album up until not long ago. (don't really remember what happened to it) I have a Beatles watch. I just reserved Beatles Anthology to my queue at Blockbuster.com. I am checking out all the discs from the library (because my collection was stolen out of my jeep a while back) and loving them all over again. Still fresh after thousands of listenings. Can you say that about other groups who have been around that long? Not really. So, if you're a fan...pull those CD's out and rejoice. If you're not a fan or (heaven forbid) have never heard the Beatles...run, do not walk, to your nearest library and check out everything they've done. You won't be disapointed...and if you are...I don't want to hear about it.
Posted by What Would Jesus Glue? at 1:59 PM

Shelley just gave me "Revolver" on CD for Father's Day. "Revolver" and "Rubber Soul" are two of my favorites, partly because I still have my dad's old LPs of those two which I listened to as a kid. You're right, kids love The Beatles. Within minutes, Janae was singing along with me a rousing chorus of "We all live in a Yellow Submarine, a Yellow Submarine, a Yellow Submarine..." A couple weeks ago at Goodwill I found a copy of the soundtrack for "I Am Sam" and while I have no idea what the movie is about, I instantly recognized that the soundtrack is ALL Beatles covers. A good steal for $2.49. Ok, I've gotta get back to "Eleanor Rigby" now... which, if it was at all possible to pick a single favorite Beatles tune (and I recognize that it is not), then "Rigby" for me would be right up near the top... along with "Taxman," "Paperback Writer," "Hard Day's Night," "Strawberry Fields," "We Can Work It Out," "Nowhere Man," "Revolution,"... ok, I'd better stop now.