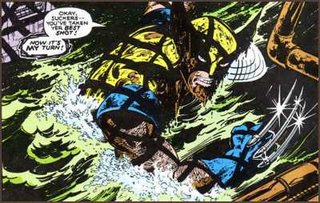 I'm sick to death of hearing how Brett Ratner has ruined the X-Men movie franchise with the latest (and last?) movie. Truth be told, it's not that bad of a movie. I enjoyed it and I'll tell you why I enjoyed it. I went into the theatre with my Comic Book Geek Button switched off. If you like comics and grew up reading comics, this is the only way you are going to enjoy these movies. Brett Ratner isn't the only director that has "messed" up a superhero. It's been going on for years. At the risk of showing my geekiness, here are some examples:

- Wolverine is a touchy-feely wimp compared to his comic book persona.
- Rogue and Wolverine were bitter enemies before they were ever teammates.
- In the comics, Cyclops is a great leader and not a lovesick wuss.
- Dark Phoenix never kills Cyclops and Wolvie never kills her. She kills herself.
- Wolverine never openly reveals his love of Jean.
- Halle Berry is so totally wrong as Storm. Storm is 6' tall and no wimp.
- When the plane is in danger of crashing, Storm does nothing. In the comics, she would create an updraft and land the plane safely. Plus, she flies for crying out loud. She's gonna stay in a plane that's crashing?
- Xavier is just plain boring in the movies. All he does is get put in a coma, get kidnapped, or die.
- Where did all those weird symbols come from on Nightcrawler? And why is he such a downer. In the comics, he's a fun guy. And he and Wolvie are best friends.

Okay, that's enough. You get the idea. What people don't tell you is that Ratner did some things that were kinda cool. We finally get to see the Danger Room (where they train). Colossus throws Wolvie which in the comics is called a "Fastball Special." Kelsey Grammar was good as Beast even though the makeup was a tad weird.
So, all you future superhero moviegoers out there...listen up. Turn off your Buttons, put all aspirations of Oscar aside, leave Turabian at home and just have fun. It's a movie based on a comic book. Release your inner child before you go.
And just so you know, the perfect superhero movie is "The Incredibles." 'Nuff said.
Posted by What Would Jesus Glue? at 1:25 PM

I agree with you about the attitude thing. I wanted to enjoy it- It was hard to turn off the part of my brain that was critiquing the movie, but worth it to try to just let the story go. So cool to finally SEE it.