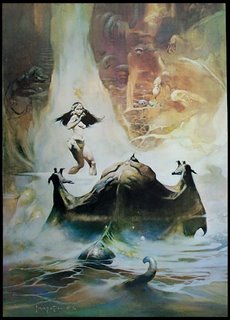 At the Earth's Core by Edgar Rice Burroughs - Even though I haven't read them all, ERB's characters and imagery have an important part to play in the artistic development of Marty. When I was young and into the whole comics/sci fi thing (as opposed to being old and into it) I discovered an artist named Frank Frazetta. I saw his artwork adorning paperback book covers at the local mall's bookstore. I loved them. I would visit that section of the store every time I went just to look at those paintings. Unlike some smart people, I didn't buy the books based solely on the art. I waited and bought the Frank Frazetta art books. But...I did read some of them anyway.
So, here I am a middle aged man trying to track down those classic ERB books from the past. It's proving difficult. Most are out- of- print which is shameful. That's almost like saying "Lord of the Rings" is out- of- print. I'm finding some at the library. The others I may have to dig around on Amazon or other rare book sites to find. Or hope that they reprint them.
Of all of ERB's creations, Tarzan is the king. But it was the Pellucidar series that captured my imagination. Pellucidar is the world that exists at the center of the earth and it is ruled by Stone Age men and creatures. Two surface men, David Innes and Abner Perry, tunnel through in their iron mole and find that Pellucidar is a most unaccomodating place for modern men. This is where the adventure starts. Granted, it is not the CGI slick adventure of the MTV era but the old-fashioned serial romance pulp adventure of years gone by. It's not high literature by any means but it's fun and fun is why I read. Hopefully after I read all the Pellucidar books I may try to track down some of his others like "Tarzan," "Carson of Venus," and the John Carter/Mars books. I think my mind needs a break from the slick CGI stuff (which I love) for a while. And, it won't kill me to slip a few classics in here and there.
Posted by What Would Jesus Glue? at 11:16 AM