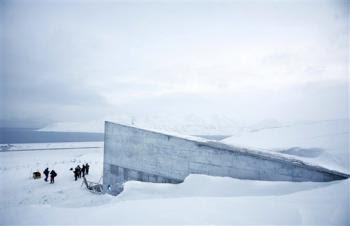 This is like something out of sci fi. Norway is opening a "doomsday vault" for the preservation of seeds. The vault can withstand an earthquake, nuclear assault and the seeds could last for up to 1000 years. That's pretty amazing. You can read the full article here.
Now, Roland Emmerich, if you're not paying attention you should be. There's movie gold in this story. It's simple enough. Many, many years from now after some global disaster a team of survivors treks to the arctic to retrieve the seeds from the doomsday vault. The fate of the world rests on the shoulders of this mission. Of course, it's not as easy as it would seem. You could throw any number of obstacles in their path. I for one would love to see mutant zombie penquins. But then there's the problem of penquins not living in the Arctic. How about mutant zombie puffins?
Anyway, this is a great disaster film just waiting to be made. Just remember, you read it here first.
Posted by What Would Jesus Glue? at 3:52 PM