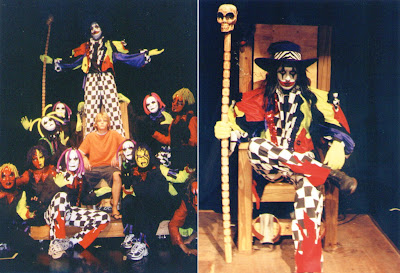 A ten year chapter of my life has ended. I am no longer helping with scripts for the youth camp in SC. It was a good run. I can't believe I've been doing it for ten years. It seems like only yesterday.
(Insert harp sounds and squiggly dream effect here)
In 1997, I moved to SC to become youth pastor at a church in Columbia. Because of my past affiliation with the Company (seminary drama team) and Face to Face (another drama team) coupled with the fact that F2F had performed at several of their events I was asked to help out with scriptwriting for the South Carolina Baptist Convention's youth events. I started with an event called Evangelympics and went on to help with 10 years worth of Summersalt camps. Heck, even I was shocked when I was asked back even after I had moved to Seattle. I think I did some good work during those years. I'm pretty sure I kept things interesting in that I resisted Christian cliches whenever they raised their ugly heads. Win or lose, I always tried to keep things real and authentic.
The pictures above are from year 3. It was called The Verdict and featured a full courtroom drama as well as the Psycho Circus dream sequences pictured here. This was a fun one because not only did I get to write the Ringmaster's dialogue (a hoot) but I also designed part of his look as well as the looks of many of the evil clowns. Good stuff!
So, thank you Angela, Scott, Steve, Kim, Murphy, Corey, and everyone else who was a part of those ten years. It was a blast!
Posted by What Would Jesus Glue? at 6:58 AM