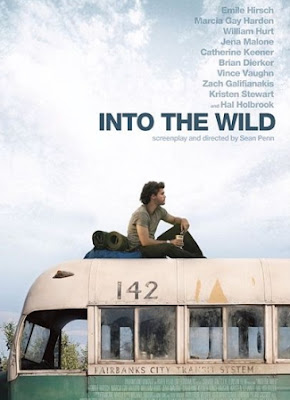 I finally got around to seeing the film Into the Wild. I had read the book years ago at the prompting of my friend Kevin. I really enjoyed the book and wanted to see how the film turned out.
It's a pretty good movie. Sean Penn did a good job telling the story of Chris McCandless, a young man who ditches his rich parents, trust fund, car, and all of his possessions to embark on a journey to "find himself." I can't be certain but I think this type of thing appeals to the heart of most men even if they aren't equipped to deal with the harsh realities of the experience. Many has been the time I've daydreamed about ditching life as we know it and hitting the road. It's a pipe dream to be sure but one that does pop up from time to time. Deep down inside, we men must have a bit of that hunter-gatherer nature still inside of us that longs for freedom from traffic, grocery stores, iPods, laptops and the like. I always envied my friend Kevin for his time spent in Alaska. Granted, he was pulling down a decent salary as a respiratory therapist but he lived in a small log cabin in the middle of nowhere...just him and his dog. Something about that just seems to make sense.
But, at heart, I am a city boy. I love being close to galleries, theaters, stores, food and all the comforts of modern life. I wouldn't last anywhere near as long as McCandless did on his journey. So, if you hear the "call of the wild" sometimes, check out McCandless' story either in print or film. It's a wonderful journey.
Posted by What Would Jesus Glue? at 10:25 AM