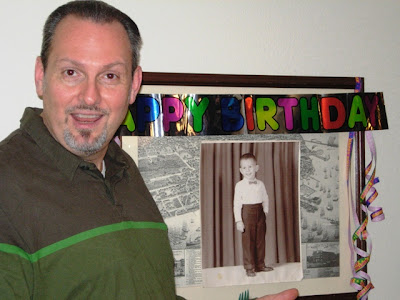 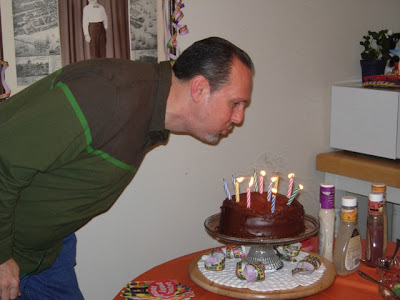 Last night, Sarah threw a surprise birthday party for me but she revealed her intentions in the middle of the afternoon. I walked out into the living room where she and Deanna (her friend from Asheville who is staying with us this week) had put out birthday banners and a cake and the like. I said, "What's all this?" and she gave up and told me about the party. Originally she had asked someone to try and get me out of the house but no one felt they could lie well enough to pull it off. So, in the end, they just told me. She asked if I suspected and I had to admit to her that about a week and a half ago she left her email account open on our computer and right there staring me in the face is an email saying "Marty's Surprise Party." Now, I have to admit...I didn't know when it was supposed to be since I didn't open the email and since my birthday came and went on the 4th I just assumed that she couldn't pull it together. Truth be told, it's difficult getting Seattle people together. They are a busy bunch.
So, a bunch of folks gathered for a celebration of my birthday. We ate, drank, laughed, and regaled each other with stories of old. Okay, so we had a good time. The party broke up way late. We didn't get to bed until after midnight which is not the norm for this old man.
Thanks again everyone for a great birthday "surprise." It's becoming increasingly hard to meet birthdays with anticipation. Getting together with friends softens the blow of getting old. Thanks especially to my bride of almost 2 years for reminding me that I am loved.
Posted by What Would Jesus Glue? at 1:19 PM