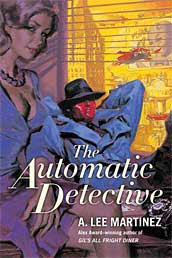 The Automatic Detective by A. Lee Martinez
"Even in Empire City, a town where weird science is the hope for tomorrow, it's hard for a robot to make his way. It's even harder for a robot named Mack Megaton, a hulking machine designed to bring mankind to its knees. But Mack's not interested in world domination. He's just a bot trying to get by, trying to demonstrate that he isn't just an automated smashing machine, and to earn his citizenship in the process. It should be as easy as crushing a tank for Mack, but some bots just can't catch a break.When Mack's neighbors are kidnapped, Mack sets off on a journey through the dark alleys and gleaming skyscrapers of Empire City. Along the way, he runs afoul of a talking gorilla, a brainy dame, a mutant lowlife, a little green mob boss, and the secret conspiracy at the heart of Empire's founders---not to mention more trouble than he bargained for. What started out as one missing family becomes a battle for the future of Empire and every citizen that calls her home."
Although slow to start, I really liked this story. Mack is a very likable character even if he is just a robot. Through all the ups and downs of his quest to find the missing family, you continue to pull for Mack. The action is quite fun in a sci-fi, comic book way. I could visualize it in my head as an animated film. This is the second book by Martinez that I have read. The first was Gil's All Fright Diner which was also a fun book. Apparently Martinez doesn't intend on writing any sequels because he continues to write other books. I, for one, would love to read sequels to the two I've read and I will get the ones I haven't read post haste.
Posted by What Would Jesus Glue? at 7:28 AM