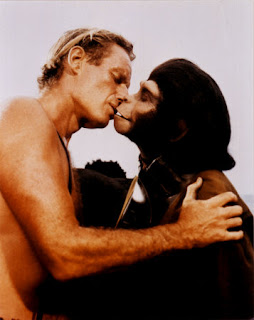 Charlton Heston was perhaps one of first actors/movie stars that made a difference in my world. Why? Because he did so many movies that a kid would love. I remember as a boy watching with much excitement such movies as The Ten Commandments, Ben Hur, Soylent Green, The Omega Man, The Warlord, El Cid, and the Planet of the Apes films. It was the last series that really captured my imagination. In fact, I recently purchased the box set of DVD's for my collection.
Heston was over-the-top. He could chew scenery better than almost anyone. And the fact that he did alot of it in sci-fi, biblical epic, and period films cemented his legend in my life of becoming a somewhat geeky fan of said films.
Heston, there'll never be anyone else like you. I hope you're upstairs gabbing with the Big Man about guns and Moses. That thought makes me smile.
Posted by What Would Jesus Glue? at 7:33 AM