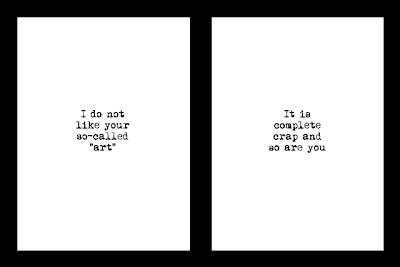 Marshall and I explored the Pioneer Square Art Walk last night. I braved a bus ride downtown to meet him. It was quite funny when I got there. I called him and he was standing 2 blocks away telling me which way to go but I couldn't see him. Duh.
We had a nice time strolling thru the area. Pioneer Square is an interesting place...great for people watching. And it's a good idea to watch the people because some of them need watching. Marshall had to guard the door while I used the bathroom because there was this freakazoid street lady who kept opening the door to expose the clueless folks inside trying to get some relief.
Eventually we got around to seeing some art. We saw some good stuff and we saw some crap. Let me start with the crap. We went in this one gallery that shall remain nameless. It represented every cliche that you've ever seen or heard of about art. Prententious is the word we used. The first piece we saw as we walked in the door was two framed pieces of paper. Right in the middle were 4 typed sentences. I don't remember what they said but that's not important. That's all it was. I don't care if it said, "There's a million dollars on the roof of this gallery. All you have to do is go get it." It just wasn't art. Poetry maybe...art, no! That piece prompted me to create my rebuttal you see above. Do you like it? Is it pretentious enough for you? We actually wandered further into the gallery which was packed with the artsy in crowd and, I'm sure, a few folks like us who had there crap detectors set on full blast. Once I saw the weird videos I was ready to go.
We did see some really good stuff though. The highlight for me was the show "Glue" at Linda Hodges Gallery. It was a mixed media show and it was truly some great work. We wandered thru the labyrinthine Toshiro Kaplan building which houses a bunch of galleries and studios. It was overwhelming and so jam packed full of people. After a while my belly started crying out for food so we headed out to Red Robin for a burger.
I'm certain Marshall and I will head back down this summer with our cameras. There's a lot of great stuff to photograph in the area. We just have to wait for the light.
Posted by What Would Jesus Glue? at 2:13 PM