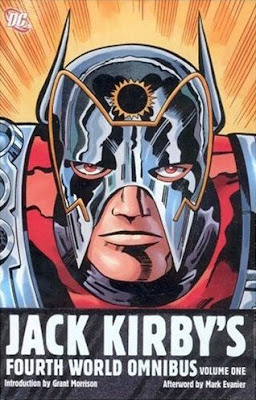 After co-creating comic book heroes including The FantasticFour and The Hulk, legendary writer/artist Jack Kirby came to DC Comics in 1970 to write and illustrate four interlocking series known collectively as "The Fourth World." Now, for the first time, DC collects these four series -- THE NEW GODS, THEFOREVER PEOPLE, MISTER MIRACLE and SUPERMAN'S PAL JIMMY OLSEN -- in chronological order as they originally appeared. These comics spanned galaxies, from the streets of Metropolis to the far-flung worlds of New Genesis and Apokolips, as cosmic-powered heroes and villains struggled for supremacy. Volume 1 features the debuts of Orion of the New Gods, the evil Darkseid, super-escape artist Mister Miracle and many others. It also features numerous appearances by Superman.
I never read these comics when they first appeared. Heck, it was 1970 and I was only 8 years old. I didn't read any comics on a regular basis at that time. I do remember either my mom or day would take me to get a comic after a visit to the barber. (or was it the dentist...I can't remember) Anywho, didn't read these. Besides, I was a Marvel guy back then. Still am. But that doesn't diminish the impact of these books on the comics world. So, I'm catching up. I can't say that Jack Kirby was an accomplished writer. This stuff is pretty cheesy. But the scope of the project and the art are epic. I don't know whose idea it was to start publishing old comics in hardback form but it's a fantastic one. These are must haves for die-hard collectors. They are beautifully books. I hope Marvel will follow suit with some of their classics. I'll be keeping my eyes peeled.
Posted by What Would Jesus Glue? at 9:35 PM