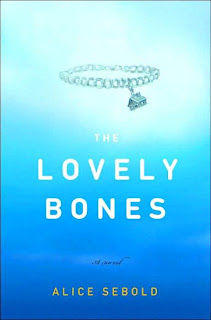 The Lovely Bones by Alice Sebold
"In 1973, a 14-year-old girl named Susie Salmon is raped, murdered, and dismembered by a neighbor. Over the next few years she watches from a personalized heaven as her family and friends deal with their grief. She sometimes becomes angry and frustrated from the choices her family makes while looking over them."*
I really liked this book. I had heard it compared to To Kill A Mockingbird. Well, it's nowhere near as good as Mockingbird but it does tell a coming-of-age story that rings similar to it at times. I guess if I were to mention one negative it would be that it seemed too ethereal to me. Granted, the main character is a ghost/spirit throughout most of the book. Perhaps the author meant for there to be a contrast between her spirit world and her interaction with the real world. It works for the most part. It just got to be too much a couple of times. It distracted me from the story and that's a no-no.
The story is very engaging. You really invest yourself in the characters. Going into the book I knew Susie would be killed but I didn't want it to happen. I wanted her to escape death somehow. And from that point on, everything that happens to her family affected me. I was pulling for them...hoping everything would turn out alright. And as for Susie's murderer, you can't wait for him to get his comeuppance. Does he? You'll have to read the book to find out.
Source
Posted by What Would Jesus Glue? at 1:03 PM