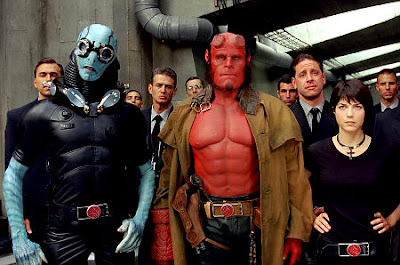 I enjoyed HBII. It was a lot of fun and it's visually stunning. There's a lot to see and be impressed with in this movie. The problem (and it's perhaps the only problem) is the script. The story is too straight forward. No twists, no turns just a bulldoze your way ahead to the end story. With a better script, HBII could have been the best flick of the year.
I love the characters. HB and his cohorts are the most lovable bunch of freaks you'll find this side of the Addams Family. They let Doug Jones (as Abe Sapien) use his own voice this time. Why they dubbed in David Hyde-Pierce in the first one I'll never know. Doug also plays a couple of other characters in the movie as well. Selma Blair is perfect as Liz, HB's gothish pyrokinetic girlfriend. I'm not sure why her fire is regular color now. (it was blue in the last film) I hate continuity problems. Ron Perlman is pitch perfect as HB. He is HB, 'nuff said. I venture to say if Ron wasn't around who would play the monsters with a heart of gold that he's so good at portraying. He's underrated...that's all there is to it.
Last but not least I must talk about the visuals. Holy crap! Good stuff. And not as much CGI as I thought. There were many creatures that were done physically thru animatronics and such. Amazing stuff. I want to be a sketch artist for Del Toro so I can sit around all day creating creatures. What a job that would be.
Once again, Del Toro proves he's the man. I just hope his future projects have stronger scripts. That's my only beef with HB. Because of that, I have to rank it a little below Iron Man. But it should have been at the top.
Posted by What Would Jesus Glue? at 1:23 PM

I saw it this morning.

It was so-so. I guess I'm not a very big fan of HB to begin with. Oh well. It was fun movie anyway. I'd probably give it a C+