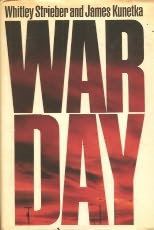 War Day by Whitley Strieber and Jim Kunetka
This book chronicles a fictional journey two men take to investigate the state of America five years after a nuclear war.
I read this book a long time ago...probably when it first came out. I think I checked it out of the library at college. I'm very much into post-apocalyptic literature, movies, etc. I don't know why. I have no desire for there to be a nuclear holocaust. I guess I just like stories involving people who have to survive tough situations. That said, I like portions of this book. I like the parts about people. Unfortunately there are other segments that feature technical specs like fallout predictions and political poll results. Those I didn't enjoy so much. I tended to skip them...hence, the book didn't take as long to read. The only reason I picked it up in the first place is because I didn't have anything else to read. That's when I grab an old standby off the shelf.
Wanted by Mark Millar and J. G. Jones
I had heard lots of positive things about the graphic novel so I grabbed it from the library. Apparently the plot in the book doesn't resemble the plot in the recent movie. Heck, I just read it a week ago and I don't remember much about it myself. It was violent and graphic with strange superheroes like the guy made entirely out of poop and the fellow with talking genitalia. The story revolves around an ordinary schmoe who discovers he has powers that he was not aware of. He then uses said powers to become a supervillian and kill everyone in sight. I don't remember much else so I guess it didn't make an impression.
Posted by What Would Jesus Glue? at 3:37 PM