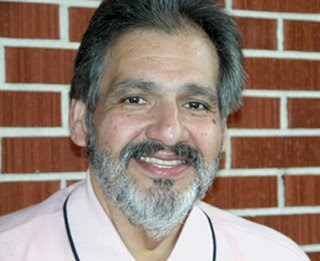 I just got the news that Eddie Echarri has passed away. It was only a week or so ago that I found out he was ill. I can't say that Eddie and I were friends but we knew and worked with each other at one time back at my home church. He was quite a guy. I remember him telling us stories about his past life as a gangster in NYC. Gunfights, drugs, the mafia...the stuff of a Scorsese movie. But Eddie moved to Pensacola and had a dramatic life change. You can read about it here. (go to the bottom of the page)
Eddie touched a lot of lives and built a great ministry at my home church. I know he will be missed but his legacy will live on for a long, long time.
I really only have one Eddie story but I'll never forget it. At that time I was serving as a youth intern at my home church while seeking a ministry position elsewhere. One day as I was leaving the church I was confronted by a very irritated homeless guy. He had a bone to pick and, since I was the only one around, he was going to pick it with me. I tried to walk away from him but he wouldn't allow it. Someone else came out and I told them to call the cops. As he continued to rant and rave, I stood my ground and waited for reinforcements. In a couple of minutes our Administrator Davecame out followed by Eddie. Dave tried to get to the bottom of his irritation but he was having none of it. Eddie took up a position behind Dave and I could see that he was ready to pounce. I'm glad the guy finally moved on because Eddie was prepared to tear him another one. I'm glad he was there that day. I wasn't scared but I'm not really a fighter. I know if it had come to it, Eddie would have protected us all.
Glad to have known you, Eddie. Rest in peace.
Posted by What Would Jesus Glue? at 9:21 PM