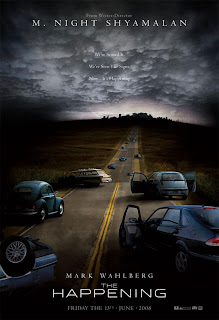 Well, M. Night's latest film finally made it to the $3 theater so Sarah and I decided to give it a go. It wasn't too long ago when we did the same thing for Lady in the Water. We left the theater wondering why so many people panned Lady because we loved it. We now know why The Happening was panned and agree. It's pretty bad. But...
...I read an interview with M. Night and he said he purposefully made the movie as a B horror film. Why he would do this I cannot say. True to his word, the movie is a B horror film similar to those other "nature strikes back" films of the 70's. Perhaps that was his model. If so, he did a bang up job imitating them. He successfully got the actors to act badly, the dialogue was goofy, and even the death scenes, while violent, are a bit otherworldly. But why? I am still convinced that M. Night is a talented guy. I still think he has it in him to outdo himself. Will he? I don't know. He seems to have some sort of block.
At it's core, this could have been a good story. There were parts of the film that worked. Just not enough parts. Nothing frustrates me more than seeing a bad film that could have been really good.
C'mon M. Night. I'm rooting for you but you've got to do better. Much, much better.
Posted by What Would Jesus Glue? at 2:45 PM

I completely agree with your review. I saw The Happening a couple weeks ago at our local discount house -- only $0.50 on Tuesdays -- and sadly, it was barely worth my money. Good premise, but I thought he revealed too much of the mystery way too soon in the film. I kept waiting for the usual M.Night twist, but it never came.