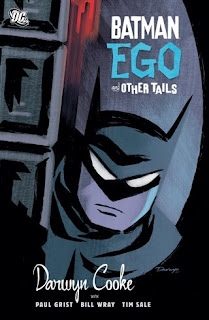 Iterations by Robert J. Sawyer, The Five Fists of Science by Matt Fraction and Steven Sanders, Batman: Ego and Other Tails by Darwyn Cooke
Iterations is a collection of short stories by Canadian SF author Sawyer spanning time from before he began his career to more recently. It was a mixed bag. Some I liked, others not. But in general, I still love Sawyer's work and plan on reading all of his books I can get my hands on.
The Five Fists of Science was a dud. It is a steampunk graphic novel about Mark Twain and Nicola Tesla teaming up to create peace on earth with a giant robot of Tesla's creation. I didn't like the story or the art. The rough, unfinished art in the back was better than what's in the finished story.
Add another Batman collection to my utility belt. I enjoyed this one. It was dark and noir and angsty and all things that Batman should be. Cooke, as an artist, has a retro style akin to Batman: The Animated Series which he worked on. The Catwoman story was nice too. I loved the character of Stark that was modeled after Lee Marvin. Too bad Marvin's not around anymore...it would make a killer movie.
Posted by What Would Jesus Glue? at 1:39 PM