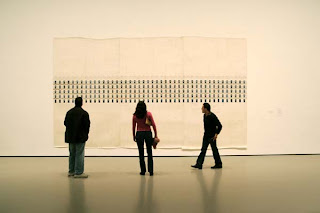 "(Richard) Serra remembers bringing his students from the School of Visual Arts to the Met in the late sixties and early seventies: 'We would decide, arbitrarily, to see Room Thirty-four, or whatever. We would walk around it for five or six minutes, take a vote about which work in it we liked the best, then stand in front of the work and clap. The exercise forced the students to visit rooms they probably would never have gone to otherwise. At the same time, the clapping broke the sanctity of the museum, which I think was good, and it returned students to the joy of looking and making distinctions. There's so much in society bombarding us every day that you get used to a certain selective inattention. Here you're supposed to discriminate but the museum is actually working against this. It dissipates the amount of attention you give to any one object unless you really come with a directed idea and say, 'I want to focus on this painting and really see it.' So you have to find a way of isolating yourself to make value judgements.'"

Source: Portraits: Talking with Artists at the Met, the Modern, the Louvre and Elsewhere by Michael Kimmelman
Posted by What Would Jesus Glue? at 2:33 PM