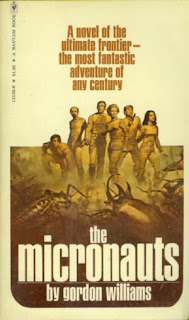 The Micronauts by Gordon Williams
"When earth's resources are finally running out and civilisation is crumbling...When food has become a luxury in a world polluted by chemical waste and ravaged by violence...When this happens, mankind's last hope is Project Arcadia - a group of dedicated scientists become the guinea pigs in a bizarre experiment, the journey across the ultimate, astonishing frontier."*
Sarah and I were in Half Price Books a few weeks back and I found myself perusing the sci-fi books. I'm not an avid SF guy but, on this particular day, I was having a good time looking at all the old SF books. I decided to buy a couple just to see if they were any good. One of those books was The Micronauts dating from 1977. (this book has nothing to do with the toy line)
I've always had a fascination for stories where people are shrunk down to bug size. When I was a kid, there was a cartoon segment on the Banana Splits called Micro Ventures. It was about a family (dad's a scientist) that shrinks down and then explores the giant world around them. They also used to shrink their dune buggy so they had a way to drive around. In one episode, they drove into an anthill. It was a great show...at least my memory of it is great. Ever since, movies like The Incredible Shrinking Man, Fantastic Voyage, Innerspace, and Honey, I Shrunk the Kids have been exciting for me.
Now, back to the book. It was slow to start...and I mean slow. It meandered thru the state of the famine and political mumbo-jumbo for a long time. When that actual shrinking takes place, the adventure begins. I rather enjoyed the miniature rescue mission where danger lurks in the form of a once harmless moth or ant. It was great fun. I think there are several sequels to the book so I might have to track them down. I may also investigate other books in the genre of shrinkage. (if such a genre exists) I will also be more likely to peruse the old SF books from now on. They aren't as sophisticated as today's SF which may be a good thing. They seem to retain an innocence and an air of fun that is lacking in alot of stories today.
Posted by What Would Jesus Glue? at 9:22 AM