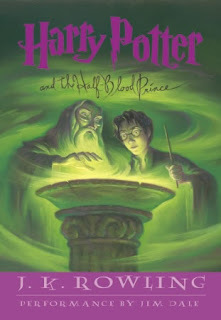 Harry Potter and the Half-Blood Prince by J. K. Rowling (audio)
I have read this book twice now and listened to it once. This is my first audio Harry Potter experience. It was very enjoyable. All of the books are read by Jim Dale and he is a very talented guy. He gives every character a distinct voice and I don't know how he keeps up with them all. It's truly amazing. It is true that certain characters bear resemblances to each other (like Scrimjaw sounds a bit like Greyback who sounds a bit like Hagrid) but that's to be expected with one man reading a book with dozens of characters.
In general, I really enjoy all of the books. Only on this listen did I detect something that annoyed me. After the death of Dumbledore (c'mon...if you don't know by now...what planet do you live on?) everyone gathers in the hospital wing and expounds on the attack by the Death Eaters. The exposition gets a bit long and drawn out and Dumbledore gets lost in the shuffle. It's only when we finally get to the funeral that we actually begin to feel some grief from the characters. Another thing that annoyed me but is just a part of the books is the fact that after 5 years of Harry thwarting Voldemort there is still no one who will listen to his opinion without saying, "Oh, Harry. You're just paranoid." No wonder he's so frustrated. I'm glad he's leaving the school in the final book. I don't know if I can stand anymore of his dealings with stupid adult teachers and clueless teens.
Last but not least, let me just say that I am looking forward to the last book and the 5th movie that are coming out soon. I am going to order the book on Amazon next week so that I can get it pretty quick. Call me a nerd if you like. If a nerd is someone who enjoys a good story then that's me. And yes, I will re-read Order of the Phoenix before the movie comes out.
Okay, nerd it is.
Posted by What Would Jesus Glue? at 11:32 AM

I'm glad you're a fan, too. I've spent the past few weeks rereading the series to prepare for the summer HP madness. Admittedly, I do this every year, before any new movie or book comes out...

I have to confess that I am sick to death of the first 3 books. And movies. Ready for some new blood.

When book 6 came out, I ordered it on Amazon, but I didn't want to wait until the afternoon mail arrived, so I went to the midnight selling the night before and hung out with the truly deranged fans. It was fun.