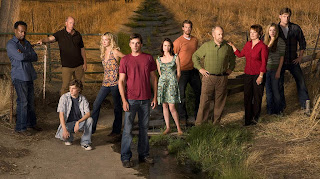 The Gordon's have cleaned house this past year. We had gotten "hooked" on quite a few shows but we've culled it down to just a couple. Right now, we watch Heroes and Jericho. We almost didn't give these new shows a try because the year before we really liked Threshold and Invasion and they both went bye-bye. We used to watch Desperate Housewives (guilty pleasure) and Lost but DH got to be a hassle and Lost got lost. I used to watch Survivor and American Idol but I have given them both up due to the fact that I felt like I was wasting my life watching too much TV. I have art to make and books to read and music to listen to and...well...the list is endless.
So Jericho ended last night. For those of you who don't know, Jericho is a post-nuclear view of life in a small town in Kansas. It's pretty darn good. We don't know if CBS has picked it up for next year or not. We hope so. Regardless, last night's episode pissed us off. They killed off Gerald McRaney's character. Dammit! We loved his grouchy-bear of an outdoors-man-mayor-good-father-devoted-husband character. He got shot. He died. I'm so mad. But you know what? It was good storytelling. It sets up a whole "dumping the leadership on the reluctant prodigal son who will seek out revenge" kind of thing. I also think it means the show will focus more on the young people versus the old. It could play out quite nicely...if the show gets picked up for next season. It's too bad though because McRaney was excellent on the show and Pamela Reed as his wife is as good as I've ever seen her.
Arrgh! I love/hate getting hooked on these stories/characters.
Posted by What Would Jesus Glue? at 8:50 AM