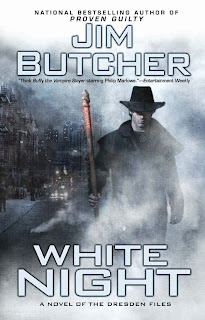 White Night: Book 9 of The Dresden Files by Jim Butcher
"Someone is targeting the city's magic practitioners, the members of the supernatural underclass who don't possess enough power to become full-fledged wizards. Many have vanished. Others appear to be victims of suicide. But the murderer has left a calling card at one of the crime scenes--a message for Harry Dresden, referencing the book of Exodus and the killing of witches. Harry sets out to find the killer before he can strike again, but his investigation turns up evidence pointing to the one suspect he cannot possibly believe guilty: his half brother, Thomas. Determined to bring the real murderer to justice and clear his brother's name, Harry attracts the attention of the White Court of vampires, becoming embroiled in a power struggle that renders him outnumbered, outclassed, and dangerously susceptible to temptation.
Harry knows that if he screws this one up, a lot of people will die--and one of them will be his brother."*
It must be obvious that I'm a fan of the Dresden Files books if I've stuck with them to book 9. I've enjoyed most of them. This is not one of them. I'm not sure why I didn't like it but I think it has to do with the story that was told. I just didn't care. The story didn't pull me in. It seemed like a half-hearted effort. I'm a bit concerned about future books as well. I heard an interview with Butcher on a podcast and he alluded to the fact that he's having to write these books in a hurry these days to meet deadlines. I believe he said there would be one a year from now on. That's great for fans who are dying to read the next book but it's not great news for story development. It sounds like he's just going to crank them out and that doesn't sound like a good thing to me. Jim, if you read this, take your time. Those of us who want a good story will wait. I promise.
For those of you who have never read any of these books, pick them up from the beginning and read them. They are great. Sure, there's a sidestep here and there. It's actually funny because the other one I didn't care for was Summer Knight. Maybe it's got something to do with the word Knight/Night in the title. So, I've really enjoyed 7 out of 9...that's a pretty good track record.
*Source: jim-butcher.com
Posted by What Would Jesus Glue? at 12:44 PM