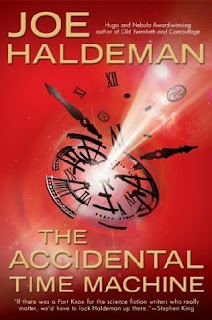 The Accidental Time Machine by Joe Haldeman
"Grad-school dropout Matt Fuller is toiling as a lowly research assistant at MIT when, while measuring subtle quantum forces that relate to time changes in gravity and electromagnetic force, his calibrator turns into a time machine. With a dead-end job and a girlfriend who has left him for another man, Matt has nothing to lose taking a time machine trip himself-or so he thinks."*
I liked this book. It was interesting. Even though the main character is a pretty smart fellow, he still has an everyman quality to him. You like him. You want him to come out on top. So, it was fun following his misadventures into the future. What didn't work for me was when he went so far into the future it just got really way out. It was way over my head there for a little bit. Thank goodness it settled back down and ended nicely.
All in all, a solid sci-fi story that didn't forget about the characters amidst all the bighead quantum physics talk...except for that small part near the end. That made my head hurt.

*Source
Posted by What Would Jesus Glue? at 4:42 PM