The Reality of Real Estate 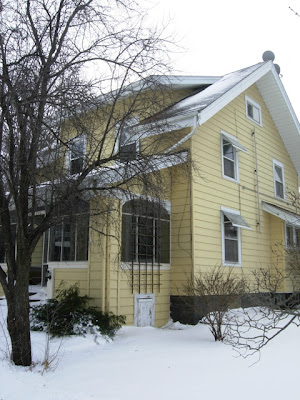 One of the the things we took note of while were strolling around Solon, IA was how much the houses were. We found 2 houses for sale. The first was a fairly large home (pictured), 2 stories with a basement. It needed some TLC but it looked pretty decent. It was selling for 139K. Just down the street was another home that was much larger. It was a really nice home. It was obvious that a lot of work had gone into it. It was 199K. In Seattle, these homes would cost between 400 - 750K. It's a bit disheartening to know that we could afford a home in Solon, IA (where we have no desire to live) but not in Seattle where we like living and can actually make a living doing what we do.
Posted by What Would Jesus Glue? at 8:42 AM

Ironic, isn't it. We've had the same happen to us when looking around in TX. Cheap, cheap housing. Here, we're fortunate to even have a 2B, 2bth apt! Crazy. Thanks for your comment on my blog. Tell Sarah I hope she's feeling better soon. Miss you guys!