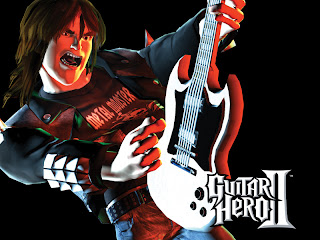 While hanging out after lifegroup yesterday, I got to play the Guitar Hero video game for the first time. Man, it's a lot of fun! Of course, I didn't do all that great because I couldn't get my fingers to work on the guitar. Another thing that hindered me was that I knew the songs too well that I was trying to play. The way you play them in the game is not necessarily how they are played on a real guitar. (not that I can play the guitar but I have a strong sense of how one is played) So, you have to get used to the little guitar controller. Steve's son Jonathon was amazing and he wasn't even using the guitar. He was just playing on the little controller that came with the Xbox. Toward the end, I played bass while he was playing lead on such songs as Pride and Joy by Stevie Ray Vaughan and Cliffs of Dover by Eric Johnson. We, of course, lost because I totally screwed up the bass part. The two songs I did best at were Bulls on Parade by Rage Against the Machine and Suck My Kiss by the Red Hot Chili Peppers. I think I did pretty well overall considering I'd never seen the game before and I am not a video game guy. Never have been. But that's one that could hook me in. Good thing we don't have one or I'd be addicted. Besides, nothing's better than being in a real band. But because of this experience, I totally understand my upstairs neighbors obsession with Rock Band, another game that allows you to play drums or sing. They play all the time and I've had to go up and tell them to turn it down. They were nice about it. The thing about it was, part of me wanted them to be quiet and part of me wanted to go in and show them how to do it. They can't sing worth a crap.
I hope I get to play again. That was the most fun I've had since we had the impromptu jam session between performances at the Christmas musical.
What can I say? I'm just a Jukebox Hero with stars in my eyes.
Posted by What Would Jesus Glue? at 11:05 AM