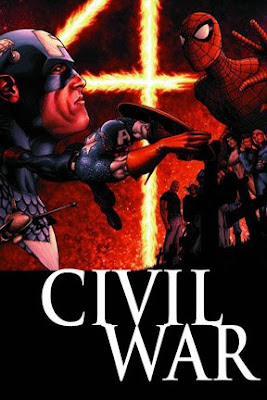 Civil War by Mark Millar and Steve McNiven
In this graphic novel, the Superhuman Registration Act has become a reality. Superheroes must register with the government, reveal their secret identities and receive training to continue as a government sanctioned crimefighter. Some heroes agree to comply, others don't.
I didn't think I'd like this but I did. It was quite entertaining. It's not perfect. It sucks seeing some of your fave heroes selling out but it's only fiction and pretty gimmicky at that. Both DC and Marvel come up with these gimmicky premises to shake up the their respective universes and sell books. It's just another Secret Wars or Crisis on Infinite Earths. I look at it this way, as long as I'm getting them out of the library...I'll pretty much give anything a go.
Batman: Broken City by Brian Azzarello and Eduardo Risso
Yet another dark, noir Batman comic. Frank Miller's influence continues to shape the Dark Knight's stories. This one wasn't too bad. The art was very cool even though I hated the way the artist interpreted Killer Croc. I loved the characters Fat Man and Little Boy. I see a lot of potential there. I wonder if they are in any other stories?
Posted by What Would Jesus Glue? at 2:13 PM