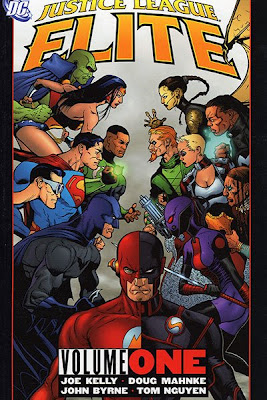 Justice League Elite by Doug Mahnke and Joe Kelly
The Justice League of America are the world's greatest super-heroes. But there are some missions that the Justice League cannot carry out...That's where the Elite come in. Led by Vera Black, the Elite acts as a secret wing of the JLA, working in the darkness to bring light to the world. But an early battle has left the Elite looking for a murderer among their own, and personal betrayal threatens to tear the team apart from the inside...and when Vera's deadly brother, the telepath Manchester Black, resurfaces, how long can the new team survive?
I grabbed Volumes 1 and 2 of this series at the library and read them both straight thru. I really enjoyed it. The story and art are both good. I've been a fan of Mahnke's work since he drew The Mask at Dark Horse. It's definitely a dark story so if you like your comics a bit lighter, avoid this one. Not much to say about this one but I do have one question: Why in the heck was Plastic Man in it? That seemed so weird and random.
Posted by What Would Jesus Glue? at 11:22 AM