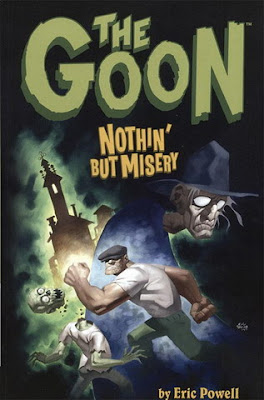 I'm afraid to report that my comic phase is continuing. I'm not sure when I'll get back to novels but, to be truthful, I haven't found any novels worth reading lately.
The Goon: Rough Stuff and Nothin' But Misery by Eric Powell
I discovered the Goon by accident when I was buying cheap comics for my art. I decided to check out the graphic novels from the library and give them a go. The Goon is basically a rough and tumble monster fighter. The setting is a sort of depression era, zombie-ridden town. It's quite fun and fairly graphic so no faint-of-hearts allowed. What drew me to the Goon was the art. Eric Powell is an amazing artist. He's kinda like Mignola, Kirby, Wrightson and Jeff Smith all rolled into one.
Batman and the Monster Men by Matt Wagner
I've never seen what the big deal over Matt Wagner has been. Ever since his Grendel books debuted back in the 80's, I've never been impressed. I found this at the library and decided to give him another chance. I needn't have bothered. The story was okay but I just don't like his art. He seems to draw okay but his inking seems bad. Perhaps it's an intentional style thing but I don't like it.
Hellboy: Seed of Destruction by Mike Mignola and John Byrne
What can you say about Hellboy that hasn't been said? It's just great. This isn't my favorite story but any Hellboy story is head and shoulders above most of the stuff that's out there. In re-reading these I've begun to really pick up on the differences between comic Hellboy and movie Hellboy. They are different entities but both are fun in their own way.
Astonishing X-Men: Gifted by Joss Whedon and John Cassaday
Since Whedon wrote it, I thought I'd give it a try. I don't read too much new X stuff because I'm a really big fan of the stuff that was done in the late 70's/early 80's and have the curmudgeonly attitude that nothing done since is as good. It seems that ever since the movies have come out, comic creators have been keying off that universe and not the ones created by the comic legends such as Cockrum, Claremont, Byrne, etc. Whedon at least pays tribute to the past but I'm not sure I like the direction he's taken. The art is fine. It's really, really good and that's a problem for me too. I like the way comics used to look. I don't know how to describe it. The word that pops into my mind is comic booky but perhaps cartoony would serve better. Today's artists are trying to make all our heroes look too real. Perhaps that's another by-product of the movies. Whatever it is, I'm not a fan. I am nostalgic for the way comics looked in the past with Kirby, Adams, Kubert, Ditko, Byrne and the like.
Posted by What Would Jesus Glue? at 10:20 AM