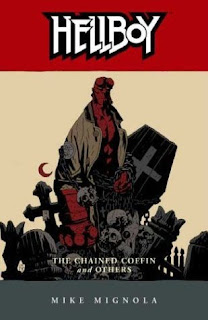 Hellboy: The Chained Coffin & Others by Mike Mignola
I decided to re-read all the Hellboy comics that the library has. The best compliment that I can pay these collections is that one day I'd like to own them all. Mignola is one of the most talented writers and illustrators in comics and Hellboy is one of the greatest characters ever created. I especially love how Mignola weaves ancient myths and faery tales into the stories. Really great stuff.
Superman: For Tomorrow Vol. 2 by Brian Azzarello, Jim Lee and Scott Williams
Volume 2 was no improvement on 1. The whole thing left me cold.
Batman: The Joker's Last Laugh by Chuck Dixon, Scott Beatty and others
This collection had too much going on. It's like they tried to throw everything in there...including the kitchen sink. The whole story revolves around the Joker being told he's got a tumor and is going to die. He then sets out on a final rampage, involving a ton of other heroes and villains. The story was too shallow and yet too dense all at the same time. They tried to do too much. The art was uneven and, due to the story, way too busy. The best thing about the collection is the cover art by Brian Bolland. Speaking of Bolland, if you ever want to read a great collection, get Camelot 3000. Great stuff.
Posted by What Would Jesus Glue? at 1:05 PM