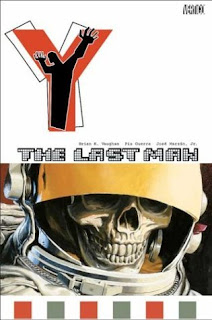 Y: The Last Man - One Small Step by Brian K. Vaughan and Pia Guerra
After a mysterious plague wipes out nearly every male on the planet, Yorick and his pet monkey Ampersand find themselves the last surviving males.
Volume 3 finds Yorick and company trying to rendezvous with the landing of 3 astronauts, 2 of which are male. A run in with the female Israeli army causes some problems and, of course, the plot thickens. I find that I am somewhat interested in this story. It's not a rabid obsession or anything. It's great that the library has the whole run of the story. I certainly wouldn't invest money in it. It's not something I would revisit over and over.
The last story in the book, illustrated by guest artist Paul Chadwick (of Concrete fame) is strange. It involves a travelling troupe of actors (actresses?) who decide to do a play about the last man on Earth. The art is only so-so and the story is slightly entertaining. I think it sets up some future events and characters but I won't know that until I read further.
I keep wishing that they would get another inker. Marzan's inks are lifeless. They have no personality. I know I keep harping about the art but it's a graphic novel. It's all about words and pictures. Good words, weak art makes for a watered down product.
Posted by What Would Jesus Glue? at 7:56 AM

hey--I should introduce you to Carmen, who also does a lot of moive reviews. Maybe you guys would like each other's blogs or something =)

Benjamin,
I don't do too many movie reviews...just list them in the sidebar to keep up. I do like to review (sort of) books. It makes me seem smart and well-read. (haha)