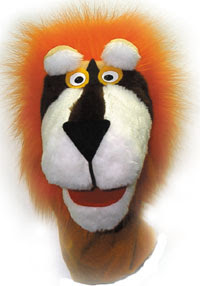 "Hank Medress, whose vocals with the doo wop group the Tokens helped propel their irrepressible single "The Lion Sleeps Tonight" to the top of the charts and who produced hits with other groups, has died of lung cancer. He was 68."*

I have great memories associated with this song. Back when I was in high school, I was part of the puppet ministry we had going on at my church. I did it for many years...even a bit while I was in college. We did some internal stuff at church but mostly we travelled to other churches and performed. We even toured once, going to the Atlanta area for a trip to Six Flags and some performances in the area.
One of the songs we used to do was The Lion Sleeps Tonight. I was always the lion. It was a pretty easy song for me. All I did was sleep through the song and then wake up at the end and chase all the other puppets away. It was a whole lot of fun. To this day I think I could sing nearly every part on that song.
As it is in life, all good things must come to an end. One day at youth camp our pastor decided that was as good a time as any to tell us that he was disbanding the puppet ministry. He never liked puppets but we never knew exactly why. So, the puppets lanquished for a while and we tried to resurrect them a few times. During college, my friend Kevin and I rebuilt the puppet screen and I did some work on the puppets that were falling apart and we did a few shows at some college events. It fizzled after a little while.
Years later, when I was in seminary, I came home to chaperone a summer camp at my home church. They asked if I could teach a puppet class at camp. I did. We used the same stage and puppets that we used when I was in high school. The kids were great that week. I let them make up skits and I picked a heavy metal version of Nothing But The Blood for them to perform. I made little puppet drums and guitars and the kid who was doing the lead singer part nailed a kind of Axel Rose dance. It was awesome. The skit was a parody of Cujo (we had a St. Bernard puppet) where the puppet gets eaten at the end. I let the kids perform the song and the skit at the talent show. The adults hated it (as usual) but the kids loved it.
So, there you have it. The memory of one song sparks a brief retelling of my history with puppets. Now you know more about me than you ever cared to. That's what you get for reading this blog.

*Source: The Associated Press
Posted by What Would Jesus Glue? at 1:29 PM