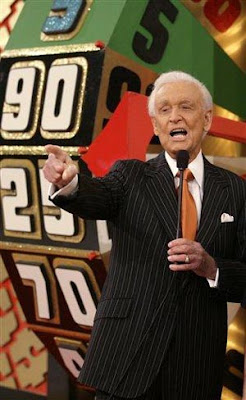 Bob Barker has retired from The Price is Right at the ripe old age of 83. Now, I'm not a fan of the show. There was a time when I was younger that I would watch it with my mom or Nana. I even remember watching Bob on Truth or Consequences.
The reason I mention Bob today is because of an article I read about him in Entertainment Weekly magazine. It seems Bob reluctantly took the gig that became his claim to fame at the age of 48. Yes, that's right. Bob Barker's career didn't really begin until he was nearly 50. That's inspiring to someone like me who at 45 is still trying to figure out what I want to do when I grow up. He jumped on this new show at 48, rode the wave to daytime stardom and stayed with that puppy until he was 83. And, it seems, he's in better shape now than he was then...and he still has all of his hair. It's gone white but it's all there. Just a few years ago, Bob was in good enough shape to kick Adam Sandler's butt in the movie Happy Gilmore.
So, thanks Bob for the many years of smiles and Showcase Showdowns but mainly for inspiring us aging fellows that there is life after midlife crisis.
Posted by What Would Jesus Glue? at 9:23 AM