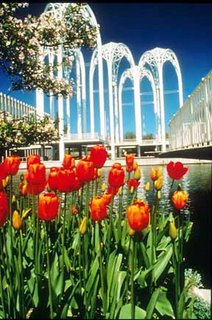 Yesterday, Sarah and I visited the Pacific Science Center in Seattle Center. Sarah had been given free passes and since it was too yucky for a boat ride, we chose indoor fun. I'm glad we did. It's a pretty cool place. First, we stopped by the Space Needle to see if our friend Darrell was working. He was. We just wanted to say "hi" but he gave us a pass to go up. We did that on the way out.
Once in the Center, we made our way to dinosaurs. It's a pretty impressive animatronic exhibit. (having seen Jurassic Park at Universal...this one ranks right up there) After that, we made our way to the Imax theater to see "Deep Sea 3D." Very good 3D film. They focus on unusual types of sea life and the 3D effect is amazing. After that we hit the planetarium and then we went to the insect exhibit and the tropical butterfly house. Imagine walking thru a beautiful garden surrounded by butterflies and that's it. They had some huge Atlas Moths too. Later, as the place was closing, we realized we had missed a whole section. Since we have more free passes, we'll go back for sure.
After a quick ice cream break, we went up in the Space Needle and then headed home. It was a fun day. We definitely need to spend some more time down there. Seattle Center also has the Experience Music Project and Science Fiction Museum that I want to see. It's too bad the Monorail is out of commission because parking at Seattle Center is relatively cheap and, if the Monorail was working, you could head down to the heart of downtown for next to nothing. They had a mishap with the Monorail around the holidays and it's not fixed yet. Who knows when it will finished.
I gotta say, Sarah and I are trying to take advantage of living here by doing all the touristy things. I know most folks don't take advantage of what's right under their noses but we are not those folks. And the cool thing about Seattle is...we've barely scratched the surface.
Posted by What Would Jesus Glue? at 12:49 PM