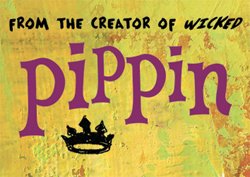 "Pippin," Stephen Schwartz's "anti-war, find yourself" musical, debuted on Broadway in 1972. The time machine at the 5th Ave. Theatre couldn't bring it back. Sarah and I attended last night's opening and I can't remember ever being that bored or annoyed in the theatre. The music is strictly early 70's with not much of an attempt to update it. The story is vintage late 60's hippy. Young Pippin, Charlemagne's oldest, attempts to find his purpose in life. Throughout his journey, he tries many different things. In the end, the circus troupe who lure him along his experiences fail to lead Pippin to his death but they are left with another innocent victim to tempt as the show ends.
There is the seed of a great story here. Finding purpose, temptation, this is the stuff of life and spirituality. This show doesn't succeed in bringing the seed to life. The performances were fine for the most part. The costumes were nice. The sets were eye-catching. But there was a lackluster lifelessness to the show. The pacing dragged. There were dead spots. Tech problems galore. (microphones kept cutting in and out) And the audience? I have never seen such a strange audience in my life. During the first act, many got up and left. By the second act, there were many empty seats. To our right was an obnoxious group of women/girls who giggled and guffawed and made asses of themselves throughout the whole performance. When applause was appropriate, the audience complied but only half-heartedly. On the way back to the car, Sarah and I were subjected to the inane behavior of a group of twenty-something theatre goers.
All in all, not a good night. Although, P. F. Chang's was marvelous as always (Jasmine was the best waitress yet) and I found a decent anatomy book at Borders for my collage. At least that part of the evening wasn't a bust. Glad I didn't pay for the show. That would have been a waste of money.
Posted by What Would Jesus Glue? at 8:45 AM