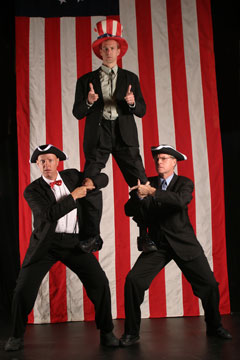 It's been a busy theatre week for me around here. Taproot is opening "The Foreigner" on Friday night so I'm having to get the theatre in spic and span condition. I watched the invited dress rehearsal on Tuesday night and it's a funny show. I could tell they still had some tweaking to do but, all in all, it was very entertaining. I am going to make my debut on Taproot's stage during student matinees of the show as a Klansman. Yep, white hood and everything. My family would be so proud. So, I have to come back to the theatre tonight to go over what I have to do for that. I'll be glad when this week is over (So will Sarah) so we can have some down time together...and not be at the theatre for what seems like 24 hours a day.
Last night I got a comp ticket to see the Reduced Shakepeare Company perform "The Complete History of America Abridged" at the Moore Theatre in downtown Seattle. Sarah had to work so I went alone. We had seen "The Complete Works of William Shakepeare Abridged" in Asheville and it was hilarious so I thought I would give this a look. It wasn't as hilarious as the Shakespeare show but it was darn funny. I am so glad I went. They also have a show called "The Bible: The Complete Word of God Abridged" that I would like to see. It's not on DVD like the other two but there is a CD. Perhaps I'll try to snag a copy of that somewhere.
So, like I said, it's been a busy theatre week here for me and my spouse. Here's to a restful next week.
Posted by What Would Jesus Glue? at 11:03 AM