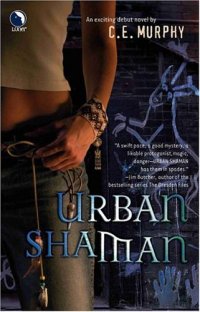 Urban Shaman by C. E. Murphy - "Joanne Walker has three days to learn to use her shamanic powers and save the world from the unleashed Wild Hunt. No worries. No pressure. Never mind the lack of sleep, the perplexing new talent for healing herself from fatal wounds, or the cryptic, talking coyote who appears in her dreams. And if all that's not bad enough, in the three years Joanne's been a cop, she's never seen a dead body--but she's just come across her second in three days. It's been a bitch of a week. And it isn't over yet."*
I didn't enjoy this book as much as I had hoped. I really liked the interaction of the characters such as Joanne and Gary, her cabbie sidekick, and all the other cops that supported Joanne in her wild adventure. But the story involving the Wild Hunt wasn't very engaging. I've read other books giving a new spin to the old legend of the Wild Hunt and the Horned God and they were better than this one. I might read the sequel. It showed enough promise that I would like to give her work another chance. I enjoy most of the books in the urban fantasy genre that I read but no one beats Jim Butcher. I read this book because Butcher recommended it. (I've had Butcher's new one reserved at the library for a while and it came in today. Tonight, I read the further adventures of Harry Dresden. I can't wait)
I think Joanne could be a character that develops into something strong especially with the Native American spin and folklore to draw upon. And it's set in Seattle but she should make better use of the Seattle landscape. Even though the finale takes place at the Space Needle (of course) it could have been used in more effective ways.
So, this one is average with potential in future books. Meanwhile, I'll be on the lookout for more urban fantasy books to read.
PS: I hate the cover.

* From the back cover description
Posted by What Would Jesus Glue? at 2:44 PM