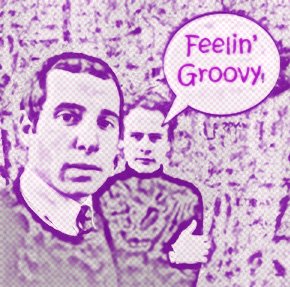 Okay, Sarah and I are eating dinner after church last night at Wendy's and they are playing this music over the system that I can't figure out. Then, perhaps the worst song in history, "Feelin' Groovy" comes on. I make a comment about how that is possibly the worst song in history (but I said it in more of a Marty way) and Sarah says she thinks it's Simon and Garfunkel. Well, I get all bent out of shape thinking there's no way those classic bards S & G did a song that lame. So, we get home and I look it up on the internet. Sure enough, it's by S & G. It's called "59th Street Bridge Song" as if that's supposed to make it better. Just look at the lyrics.

Slow down, you move too fast.
You got to make the morning last.
Just kicking down the cobble stones.
Looking for fun and feelin' groovy.
Ba da, Ba da, Ba da, Ba da...Feelin' Groovy.

And that bassoon thing? C'mon! Actually, I found out that a group called "Harper's Bizarre" also recorded it. I think they are the ones with the bassoon jams. S & G's version just has some guitar and a little tinkly bell thing. (how sweet) But they still wrote the darn thing. You know, it's not that it's a bad song. There're lots of bad songs out there. But it's a bad song by S & G. Yeesh. It just soils my image of them is all like "Muskrat Love" by America. Captain and Tenille can sing it all day long but it makes me shiver thinking it was recorded by America. I just don't want my faves from the past tarnished in any way. It would be as if Jimi Hendrix recorded the Barney the Dinosaur song. Gack! So, my wife got one right. Kudos to you honey for being right and shame on you for knocking my musical heroes off their pedestals.
Posted by What Would Jesus Glue? at 10:13 AM

Here's one for you, Marty. Did you know that Sammy Davis Jr. recorded a version of "Shaft"? I'm dead serious.

They say this cat Sammy is a bad mother
SHUT YOUR MOUTH!
I'm talkin' 'bout Sammy!