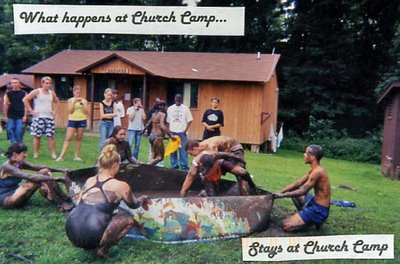 Ah, those heady days of youth when you could throw off the shackles of home and spend a week at church camp. The picture above is so true. There is no way I would have wanted my parents to know what happened at camp. And for those of you who say, "At church camp?" it's obvious you've never worked with kids. I have spent more time at summer camp as an adult than as a kid. I've been a counselor or performer at dozens of camps. Let me tell you, a lot of those "little angels" ain't so innocent. I have hundreds of stories. Here are a few.

- As a counselor for a 3-6th grade camp, I listened to a late night conversation amongst the boys about girls. (they thought I was asleep) It was innocent enough for a bit but then the little bugger's inner horndog came out. I nipped that conversation in the bud with the voice of God piercing the dark. "Boys! It's time to go to sleep!"
- When I was a wee pup, our funtime privileges were taken away because the older boys were throwing the girls in the creek so they could see thru their shirts. (thus, the history of the wet t-shirt contest)

Now, these instances are rare. What I like are the funny stories.

- At one camp, my boys kept telling me that we're gonna sneak out the last night and go skinny dipping in the creek. I said sure, that's fine. Well, earlier that night, we took the kids to the creek and the camp director told ghost stories. That night around midnight I told the boys it was time to go. They immediately went into excuse mode. "Marty, I'm too tired...boy, I sure am sleepy, etc." They were too scared to move. That camp director knew his stuff.
- When I was travelling with the Company, we hooked up with the camp staff one night for a water balloon fight in the dark. We had tons of water balloons and those launchers. We split into 2 teams and went to opposite ends of the field. We then proceeded to launch balloons at each other in the darkness. You knew you scored a hit when you heard, "Splash. Ow!"

We were talking about this at the Company gathering! I still have a scar on my left leg from that night! Do you remember Jon P. making everybody on the other team (my team)think that we were getting very close and accomplishing direct hits... he was lying!! And his team sent out spies ... Good time folks! The water balloon fight is one of my favorite memories and one of my favorite Company camp experiences! My favorite youth camp experience features the public squashing of a bannana!

I don't remember specifics of that night just the giggly overall joy of the experience. Where in Texas was that camp? Was it Lebanon or Palestine? Some Biblical name I think. How did you get a scar?

Remember when you were my camp counselor, back in the 80's?

During one camp, I fell out of the shower, and you and Darren teased me during the "Camp News", something about installing seat belts in the showers?