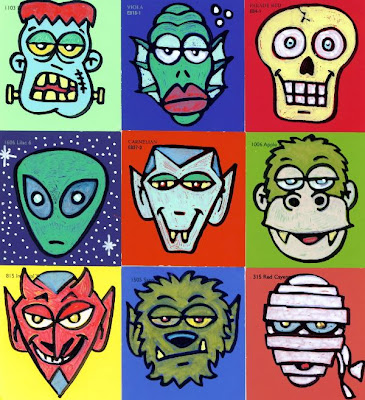 Well, as promised, here's my little treat for all you happy people. I wanted to finish a Halloween poem I had been working on but it just didn't happen. Here's the substitute. This really should be posted under Mart History but I'll make an exception this once since not many people visit my Mart History page anyway. Heck, I probably don't update it enough to warrant a visit anyway but...well...that's neither here nor there. On with the show!
This little drawing is actually a group of paint chips like you'd get at Lowe's to figure out what color you want your wall to be. A few years ago, I found that I liked the slick surface and that it was fun to draw and paint on them with a Sharpie and some paint pens. Well, it was fun for a bit until the paint pens dried up. I bought some more pens and they dried up as well. Paint pens just do not hold up very well and since they are very expensive, it just wasn't worth doing anymore.
These little guys were part of that brief experiment with paint chips. I just found myself drawing all the classic monsters of Hollywood history. Then I thought it would be funny to line them up like the Brady Bunch. Then I came up with the idea of calling it The 'Fraidy Bunch. Then I got an idea for a comic strip or comic book. Then...well...I got frustrated and bored with the whole thing so I stopped. Maybe one day I'll resurrect The 'Fraidy Bunch. I think I could do the idea justice with paint. Shoot! Now I'm thinking about it again.
Well...anyway...Happy Halloween!
Posted by What Would Jesus Glue? at 2:05 PM

Zak approves whole-heartedly of your "Fraidy Bunch". You should have seen his eyes light up when he saw it! (I like it too!)