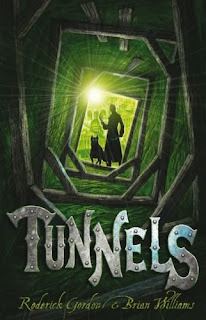 "14-year-old Will Burrows has little in common with his strange, dysfunctional family. In fact, the only bond he shares with his eccentric father is a passion for archaeological excavation. So when his dad mysteriously vanishes, Will is compelled to dig up the truth behind his disappearance. He unearths the unbelievable: a subterranean society that time forgot. "The Colony" has existed unchanged for a century, but it's no benign time capsule of a bygone era. Because the Colony is ruled by a merciless overclass, the Styx. Will must free his father--is he also about to ignite a revolution?"*
This book came highly recommended by a friend so I wanted to like it. Truth be told, I stopped reading at 350 pages. I should have stopped sooner. Nothing much happened in the book. Sue me but I like for things to happen in a story. And, to be honest, I didn't like the characters. Now, I've been seeing lots of comparisons to Harry Potter about this book. Nothing could be farther from the truth. Sure, there are similarities in the basic plot but the writing is nowhere near the quality of Rowling's. Rowling's chapters are laced with action, character development, humor, and juicy clues that drive you toward the end. Tunnels leads you down into a tunnel with nothing but a dead end.
*Link
Posted by What Would Jesus Glue? at 9:18 AM