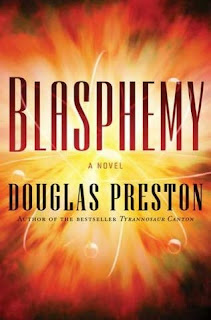 Blasphemy by Douglas Preston
"The world's biggest supercollider, locked in an Arizona mountain, was built to reveal the secrets of the very moment of creation: the Big Bang itself. The Torus is the most expensive machine ever created by humankind, run by the world's most powerful supercomputer. It is the brainchild of Nobel Laureate William North Hazelius. Will the Torus divulge the mysteries of the creation of the universe? Or will it, as some predict, suck the earth into a mini black hole? Or is the Torus a Satanic attempt, as a powerful televangelist decries, to challenge God Almighty on the very throne of Heaven? Twelve scientists under the leadership of Hazelius are sent to the remote mountain to turn it on, and what they discover must be hidden from the world at all costs. Wyman Ford, ex-monk and CIA operative, is tapped to wrest their secret, a secret that will either destroy the world…or save it. The countdown begins…"*
This is a pretty good story. It starts slow and is slow to ramp up but once it gets there it's fairly interesting. I can't say much about the plot without spoiling the read. Let's just say it's a science vs. religion story with a bit of a twist. I'm glad I liked it. Preston, with his writing partner Lincoln Childs, used to be one of my favorite authors but their last several books have left me cold.
*Link
Posted by What Would Jesus Glue? at 3:47 PM