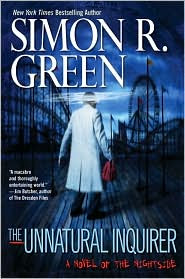 The Unnatural Inquirer by Simon R. Green
"Welcome to the Nightside, that secret square mile located in the dark heart of London where the sun never rises and people can fraternize with every myth and monster imaginable. John Taylor is a P.I. with the special ability to locate anyone or anything. The Unnatural Inquirer, the Nightside's most notorious gossip rag, has offered him a million pounds to find a DVD purported to contain an actual recording of the afterlife. John doesn't know if it's true, but someone-or something-thinks so, and will stop at nothing to possess the disc."*
I really like Green's Nightside series. That said, this one was weak. Not as weak as my least favorite (Something from the Nightside) but pretty weak. Still it was an enjoyable and easy read. Since the story arc of the Lilith War ended there hasn't been another large arc started. He did okay without it last time around with Hell to Pay but this time the book suffers. He does hint around that something may be brewing but nothing decisive is given away as to when it might hit the fan. So, a pleasant if not totally satisfying respite in larger picture that is the Nightside.
*Link
Posted by What Would Jesus Glue? at 3:03 PM