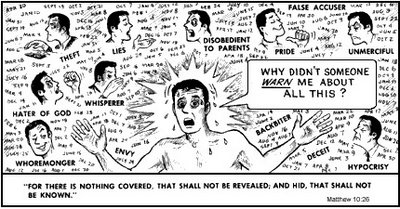 Does anyone out there remember Chick Tracts? I do. When I was young, these things were all over the place. I actually had some of the tracts and comic books because I liked the art. Whether you agree with his tracts or not, the artwork by Jack Chick and Fred Carter is pretty amazing.
Well, it seems those tracts are still being used. Since I started working at Taproot in February, I have found one or more Chick Tracts in the upstairs lobby ladies restroom during every preview week for every show. And for each show, it's a different tract. I don't know what this person's ulterior motive is. I would guess that they know that Taproot is a faith-based theatre because they obviously attend every show. I guess they figure the messages of the shows aren't enough. These folks need a little extra push. Or at least the ladies upstairs do.
So, what do I do with those tracts I find. I keep them. I've used sections of one in one of my collages. If I could afford it, I'd get a copy or two of every one.
Posted by What Would Jesus Glue? at 2:15 PM

Gosh, those Chick tracts are still around down here. I keep finding mine at work, too. On the cash register, though. G and I used to collect them, but now... I no longer find them amusing.

If I find more, though, I'll start sending them to you. Until then, http://www.chick.com/catalog/tractlist.asp