Just Say Nope to the Pope 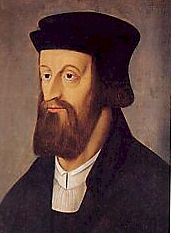 "The most radical attack (against the popes) came from Oxford don John Wyclif. He argued that whatever political or religious authority church leaders had was based on their moral authority, so the decrees of an immoral pope had no weight at all. In fact, even a righteous pope was only the bishop of the city of Rome: the head of the worldwide church was Christ alone. He ended up concluding that the papacy - good pope or bad pope - was the Antichrist.
Wyclif challenged the universal idea that the church was the final authority over Christian life and belief, preferring to see the Bible as God's only revelation. Rome held the Bible in equally high esteem but insisted that only the church could interpret it reliably. Wyclif had no faith in Catholic hierarchy, and so his followers translated the scriptures into English to let ordinary people hear God's truth for themselves. This was anarchy, said the bishops; translation unauthorised by the church was bound to be twisted and heretical. 'Condemn the word of God in any language as heresy and you call God a heretic,' replied Wyclif"

As I've said before, I so regret not taking a church history class at seminary. This stuff is so interesting. I think Wyclif may be my new hero. It's hard to tell though. This book really is A Short History of Christianity. If any of you know of anything a bit more meaty, yet not too academic, let me know. I'm interested in reading more.

Source: A Short History of Christianity by Stephen Tomkins
Posted by What Would Jesus Glue? at 9:40 AM

"The Story of Christian Theology" by Olson is written in a narrative style and Roger's writing is very readable and informative. Roger is now a friend (although I didn't know him back when I first read this book) who teaches at Truett and is a member of my church, a thoughtful and insightful theologian and this book reflects that.

The Gonzalez work is a classic seminary text and reads a bit more like a textbook than the Olson work does, but that doesn't mean it is dry and uninteresting. Quite informative and rich in its own right. It typically comes in two volumes but I did pick up a single hardback containing both volumes from www.cbd.com .

Either one I think you would enjoy, just based on the quotes you're putting up here on the blog.