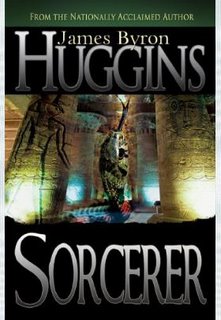 Sorcerer by James Byron Huggins - "Retiring to rural New England, ex-detective Michael Thorn discovers a mysterious skeleton in his new home! When it suddenly disappears, his investigation unearths the stunning revelation that the bones belong to an ancient Egyptian sorcerer who fought Moses! Can Thorn defeat the necromancer before he wreaks havoc on the world?"*
I've read Huggins before and enjoyed it. I own copies of Cain and Leviathan and hope to get my hands on a copy of Hunter soon. I also plan on reading Nightbringer. This book, however, doesn't seem to be one of his best. The only thing I think it lacks is character development. It's a rip-snortin' action read. It's got killer sorcerers, an ex-cop who is tough as nails on the outside and a teddy bear of a family man on the inside, the elite ninja Catholic squad called the Assassini, priests, nuns, and a quaint little town that doesn't know what's gonna hit it. What you don't have is adequate background on any of the characters. Sure, you like them because they are trying to protect a woman and some kids but it would have been nice to find out a bit more about them as people. That said, I still enjoyed it but not quite as much as his others, my favorite so far being Hunter. If you want to read some Christian fiction that fits the mainstream market, look for Huggins. He's better than Peretti when he's on.

* Source: Christianbooks.com
Posted by What Would Jesus Glue? at 12:34 PM